Five Commission members, one of which is the Mayor, are elected at large by the voters of Cocoa Beach to serve for a four-year term. The Mayor presides at all meetings and performs duties delegated to the Mayor by the City Charter and City Commission. The Vice-Mayor is elected yearly by the City Commission at the annual organizational meeting, held after an election. 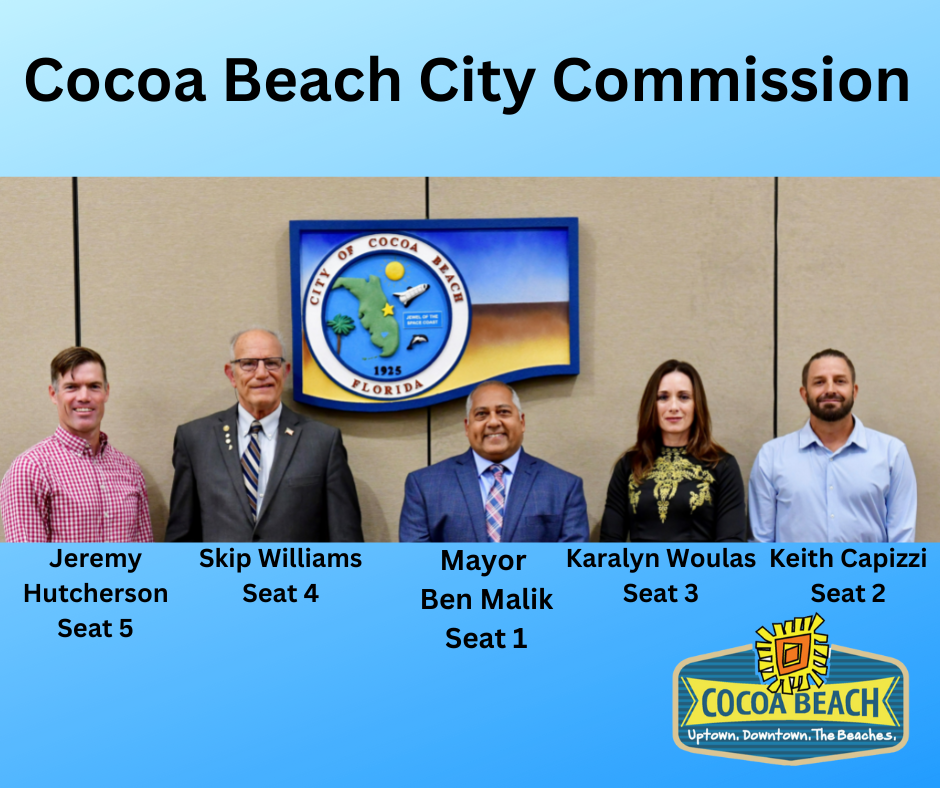 Email Mayor Ben Malik
Elected as Mayor in 2016, Ben Malik is originally from Boca Raton, Florida, but has called Cocoa Beach home since 2007. He graduated from the University of Florida with a Bachelor’s Degree in Business Administration and went on to receive his Masters in Business Administration. Currently, the Mayor works for a community bank as a Vice President/Area Relationship Manager. Mayor Malik is also a proud husband and father of two.

Email Commissioner Capizzi
Elected as Commissioner in 2022 for a two-year term, Keith Capizzi has been a resident of Cocoa Beach for over 30 years.  He has 21 years of machinist, metallurgy, and marine experience, while serving as a Merchant Marine, and working as an Engineer.  He owns a property management company, manages a Reggae Radio station, and a few Facebook pages. He considers himself a problem solver, and fiscally responsible.  He loves Cocoa Beach for the small town feel where anyone can go anywhere, and see someone they know.  Commissioner Capizzi is a proud husband and father of one.  He attends Club Zion Church where his father is the pastor.

Email Commissioner Karalyn Woulas
Elected as Commissioner in 2016, Karalyn Woulas has been a resident of Cocoa Beach since 2008. She holds a Bachelor’s of Science in Aerospace Engineering, a Bachelor’s in Applied Mathematics from the Florida Institute of Technology and a Master’s Degree in Project Management from Embry-Riddle Aeronautical University. Currently, she is employed as a Range Safety Engineer at the Forty-Fifth Space Wing (United States Space Force). In her spare time she manages two musical bands as the lead singer and guitar player. Her interests lie in improving the City and preserving the small town lifestyle, while nurturing opportunities to moderately redevelop aging infrastructure found in the City,   in order to maintain the lifestyle that we as citizens of Cocoa Beach live for today.

Email Commissioner Skip Williams
Elected as Commissioner in 2007, Skip Williams is originally from Indian River County, Florida and has been a resident of Cocoa Beach since 1986. He holds a Mechanical Engineering Degree from the Florida Institute of Technology and a Master’s Degree in Engineering from the University of Central Florida. Currently employed at NASA, he works in the Ground Systems Development and Operations Program. Commission Williams takes an active role in community programs, having served as the Chairperson of the Cocoa Beach waterways and Wildlife Board, graduated from the Cocoa Beach Citizen’s Academy, and is a member of the Fire Department Community Emergency Response Team (CERT). His affiliations include: volunteering for Keep Brevard Beautiful; member of Christian Surfer Cocoa Beach; attends Calvary Chapel Surfside.

Email Commissioner Jeremy Hutcherson
Elected as Commissioner in 2022, Jeremy Hutcherson is originally from Atlanta, Georgia, and began calling Cocoa Beach home in 2011.  He holds a Bachelor in Mechanical Engineering from Georgia Tech and a MBA from the University of Florida.  Jeremy has over 25 years of engineering and project management experience in military weapon system development, and is now a Project Engineer for a local aerospace defense contractor. He is affiliated with Project Management Institute, Indian River Flying Club and Aircraft Owners & Pilots Association. Jeremy is passionate about keeping Cocoa Beach a safe, family-friendly community and maintaining a healthy appreciation for our natural resources.  The Hutcherson family enjoy an active, outdoor lifestyle and are involved at The Pointe Church in Cocoa Beach.