Officer Nicholas Ingersoll began his career with the Cocoa Beach Police Department in 2019, following his service in the U.S. Coast Guard, where he retired as a Chief Boatswains Mate. He serves as a Patrol Officer, Field Training Officer, and performs Marine Patrol when staffing allows.  Officer Ingersoll was selected as the Department’s Officer of the Year for many reasons, but primarily for his proactive investigative efforts that led to narcotics seizures, cash and vehicle forfeitures, and routinely going above his regular duties to improve the operations of the Department and assist other members of the team.

Some of Officer Ingersoll’s highlights that earned him this recognition are as follows: 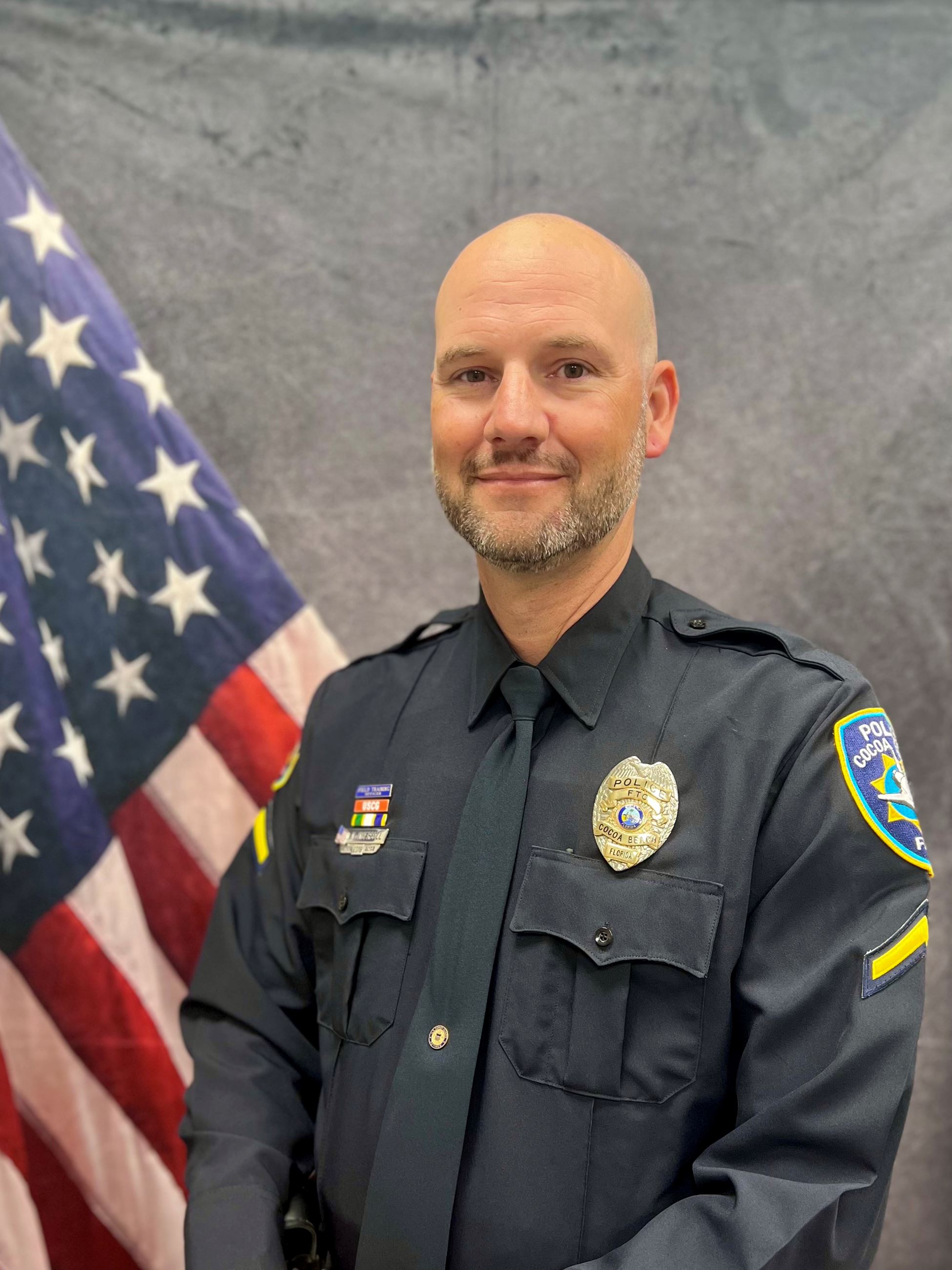 Officer Ingersoll engaged in a foot pursuit of two occupants of a vehicle that had just fled from an attempted traffic stop. Upon apprehension of both occupants, Officer Ingersoll searched the vehicle and discovered over eight pounds of cannabis, THC oil, edibles, paraphernalia, and seized approximately $7000 under the authority of the Florida Contraband Forfeiture Act.

A few weeks later, Officer Ingersoll initiated a traffic stop and arrested the operator of the vehicle for driving under the influence. During the investigation, he found the defendant to be in possession of cocaine, MDMA, and hallucinogenic mushrooms, and subsequently determined the defendant to be operating a vehicle in commission of a felony and seized the vehicle under the authority of the Florida Contraband Forfeiture Act.

In another incident, Officer Ingersoll was on foot patrol downtown when he observed two people asleep inside a parked and running SUV.  Upon further investigation, he developed probable cause to search the vehicle and discovered almost a pound of cannabis, a large amount of THC candy, Adderall, hallucinogenic mushrooms, and cocaine.  Approximately $5000 was seized under the authority of the Florida Contraband Forfeiture Act.

Some additional noteworthy statistics—in 2021, Officer Ingersoll made 75 arrests and wrote a combined total of almost 1000 traffic citations and written warnings.

Officer Ingersoll also played an integral role in preparing for the Department’s re-accreditation onsite assessment through the Commission for Florida Law Enforcement Accreditation. He volunteered to inspect and detail the Department’s various special purpose vehicles, such as the vessels and all-terrain vehicles, ensuring compliance to many standards, and arrange them for a static display. Officer Ingersoll was responsible for all logistics associated with this component of the assessment, to include welcoming the accreditation assessment team and answering questions about the equipment and operations.

Officer Ingersoll takes time to work with newer officers; he works shift shortages and special events without complaint; and routinely volunteers to attend community events that focus on our youth, making positive impacts along the way.  He is certainly an example for other officers to emulate.  For this and so much more, Officer Nicholas Ingersoll is the Cocoa Beach Police Department 2021 Officer of the Year!

2021 Telecommunications Officer of the Year

Communications Training Officer Shelby Teat is a four-year veteran of the Cocoa Beach Police Department. She has been selected as the Cocoa Beach Police Department 2021 Telecommunications Officer of the Year for her dedication, initiative, strong work ethic, and her willingness to always be a team player.  Shelby continues to improve her skill set for the betterment of the Department and safety of our police and fire personnel.

Some of Shelby’s performance highlights from 2021 are as follows: 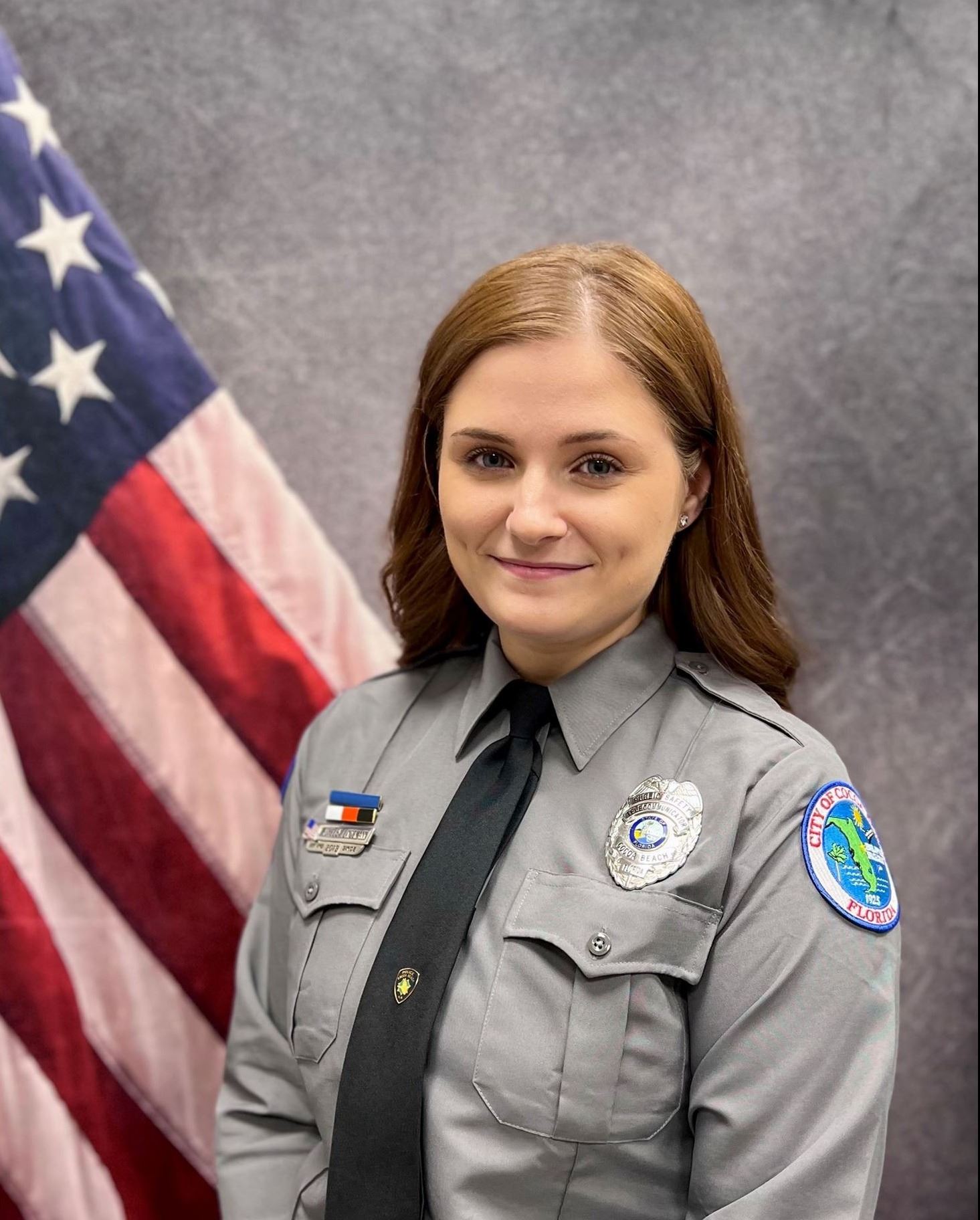 Shelby went above and beyond while taking a call from a distraught individual that was seeking assistance due to his suicidal thoughts.  She took the call via Text to 9-1-1.  The caller only provided limited information—his first name and that the Department had contact with him on a previous date at a local hotel. The caller made comments via the text that “this was it for him”.  Shelby quickly provided the officers the limited information she had and sent them to the hotel to try to locate the individual.

In another incident, Shelby received a call for an ocean rescue near the International Palms Resort. Two swimmers were struggling in the water and appeared to be in distress. Shelby was quick to dispatch police, fire, beach rangers, and lifeguards to the call. She was able to keep units advised of the swimmers’ status, providing location updates to all units as the caller reported that the individuals appeared to be drifting. Shelby’s quick actions, ability to multi-task and keep all units updated, while communicating on multiple talk groups on the radio, resulted in both swimmers being rescued and neither swimmer requiring medical attention.